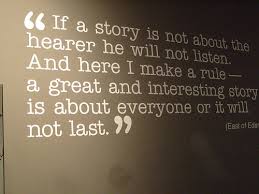 The shaman figures prominently in many Precolumbian and aboriginal cultures, and for millennia they acted as stewards of an oral legacy stretching back to time immemorial.  Around dancing fires, the people huddled and listened as the Shaman cast his spell; but his sorcery was not supernatural – it was story telling. Without stories, there is no past, and without a past, there can be no identity, no destiny, only the perpetual present, stuck spinning forever.

Telling stories defines who we do, what we’ve done, and what we’ve got the potential to actually achieve.  No matter what medium, we’re hard wired to respond to stories, but our emotions don’t respond, as a rule, as much to what we say as how we say it.  That means like in haute cuisine or high fashion, presentation, psychologically speaking, really is everything.

Go to any Coffee Bean within a 100 mile radius of Los Angeles on any given weekday afternoon, and you’ll see at least a couple of somewhat scruffy looking dudes, faces lit by the glow of Final Draft on their Macbook Pros – always Final Draft (the standard software for screenwriting) and always a Macbook Pro, always with matching earbuds playing sweeping studio scores on shuffle.

Besides their tech specs, of course, standardized largely because of the tightly defined templates required by this most specific and stylistically dependent of genres, these aspiring writers, whether they know it or not, share another commonality.  They might say their work is influenced by Tarantino or Truffaut, but it is, in fact, shaped far more by one man.

For better or for worse, the work of this recently deceased self-described storytelling “guru” (before social made that word pretty much meaningless) has profoundly impacted the mainstream cultural conventions of contemporary communications, arguably more than any one individual since the dawning of the age of mass media, because the formula he taught has found its way into the collective conscious of any writer trying to get enough points to qualify for another year of benefits automatically.

Field taught a formula for storytelling as straightforward and simple as the shamans whose crucial role, spinning the story of a society, screenwriters now largely possess.  Big budget blockbusters, and the online noise reverberating in their massive marketing wake, follow a familiar formula because when it comes to telling stories, there are, in fact, strict rules for success.

Like everything else whose essence can be distilled into a formula, Field identified what he called “the basic film paradigm,” which is to say, the minimum posted requirements for telling a story on screen, their paint-by-numbers production as repeatable and regimented as widgets or Whoppers.

A screenplay, as a rule of thumb, consists of one page for every minute of screen time, meaning that a two hour movie must be 120 minutes. It’s no coincidence that most movies have that uniform length, because those 12o minutes can be perfectly subdivided into the most basic structural components of a story: the beginning, the middle, and the end.  Stories aren’t stories without them – and they form the basis for what’s commonly referred to as “the three act structure.”

That three act structure also forms the basis of every successful business presentation, marketing campaign or sales pitch.  It’s a formula that works, and works consistently – and one that if you’re not following, you’re likely not getting your story across. And it’s our stories that define, differentiate and drive all of us daily.

Here’s how to get yours across, using the Basic Film Paradigm that most screenwriting syllabuses feature on the first day of class, although Field, like most writers, was simply improving and refining a familiar formula that’s been passed down since the formation of consciousness and communication.  But it’s an easy formula to follow.

Anyone who’s ever stared down a blank page knows that the hardest part of capturing any story is knowing where, exactly to begin.  For most brands, this starts with their formal founding.

But in many cases, the story starts far before the action itself, from the experience of its founder to the evolution of the marketplace. For some, it starts decades after the brand hit the market, with a relaunch, rebrand or restructuring (or some combination thereof).

But knowing that exact moment a story starts – what’s known as the inciting incident – is key, because it’s the baseline from which all action must, inevitably, rise.  It’s only through rising action, the forward momentum of movement, that a story’s structure is sustainable.

All opening acts function to establish exposition and set the plot in motion; similarly, when telling your story, inspiration should quickly give way to action – and no matter what your brand story might be, its origin myths serve as a foundation for what follows, but as Act II begins, the plot – proverbially and literally – thickens considerably.

Plot Point 1 is where the world of the story moves from establishing exposition to the real meat of the story. Think: the dead body in murder mysteries, the romantic comedy “meet cute,” the part of the TV show that comes after the cold open and title cards.  Or, the moment a company won its first major customer, went public, or perfected its product. Find that critical instant where your trajectory completely changed, and you’ll have the momentum you’ll need to make it through the end of Act II, where the confrontation finally reaches its climax.

Plot Point #2, as Field refers to it, is when the biggest obstacle thus far intertwined into the narrative is encountered and ultimately, overcome.  That, for brands, businesses and bloggers, repeats itself with every impression, because there’s no role for new characters – or customers – when the story’s already reached a resolution.

This means the Plot Point #2 should function as the call to action for content or a campaign, that moment where you’ve finally triumphed over a formidable challenge (personal or professional), and steer your audience towards the happily ever after of enough experience becoming expertise.

That final act in your story, if you’re a business, brand or blogger, is still being written, so Act 3 has no denouements, no real resolution.  That’s up to sales, recruiting, or whoever has to close the deal. After all, no story sells itself. That’s why we made up marketing.