Latency Period for Life: True Confessions of A Fake Adult. 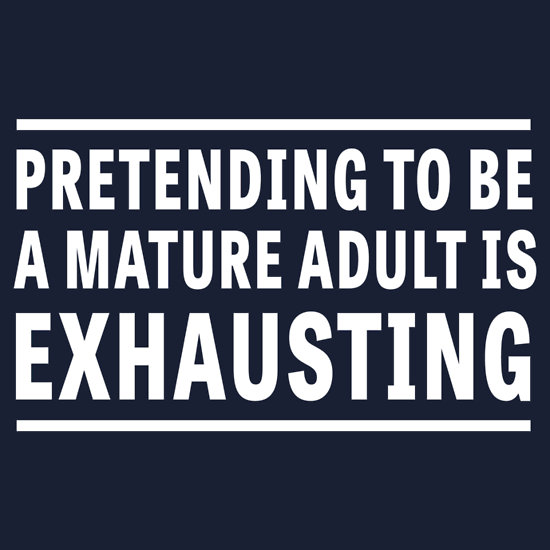 Every so often – like when I’m presenting for an auditorium full of serious looking people in suits frantically scribbling notes, or when I’m sitting listening to some C-Suite exec drone on about product roadmap in a board meeting – I can’t help but feel like I’m a little out of place.

In my mind (and fortunately, in the minds of most others in the industry), my work life is a lot like when I was a kid and used to try on my Dad’s neckties and walk around the house with one of his battered old briefcases.

While I’m a decade or so in my career, I still feel distinctly like I’m pretending to be an adult – and for the most part, people seem to be buying that act, even with the ubiquitous baseball hat, hip hop tee shirts and hoodie.

I have some props I use to sucker the suits I meet into treating me like something other than the punk kid I really am – my beard helps, of course, and I grew it because when I’m clean shaven, I look approximately 12 years old, a little like Sean Astin in Rudy. I hand out business cards mostly because they’re a little accouterment of adulthood, my company name and job title coming in handy in my daily charade.

But I’ve never felt entirely comfortable in the Corporate world, even when that world involves working in a bathrobe and playing Xbox One during the most noxious conference calls and virtual meetings on my calendar. Every time I meet a client, every time I present at an event or put my byline on a post about best practices, there’s a surreal sense that I’m living in some weird piece of performance art, and I’m constantly in character.

Because the truth is, I still haven’t fully come to terms with my adulthood, even as I inch up on midlife (an imminently depressing thought).

And I’m not alone, either. It’s funny that many of the biggest degenerates, dope heads and delinquents I grew up or went to school with – the guys who I did stupid shit with, basically – have somehow all become, well, serious professionals.

There’s my buddy who’s the principal of a charter school in Harlem; the one who’s the CEO of a billion dollar mobile security company and the one whose a tenured professor of media studies at a prestigious university, for example – not to mention the dozens who have finished walking that long road to the middle, ending up in distinctly dull, very grown up sounding jobs like financial advisor or project manager. None of us know how we got here, and none of us know what the hell we’re actually doing (or at least will admit to it).

Off To Never Never Land.

We’re still the same people who not so long ago used to light shit on fire, smoke a ton of pot and do all the dumb stuff that kids do – and when we’re not playing grown-up, frankly, we still pretty much do the same shit.

It’s only the odd anecdote about having trouble with a direct report or someone showing up late to a kegger because they had to close out month end that reminds us all that times have changed, even if most of us fundamentally haven’t.

This isn’t a reflection of maturity; rather, it’s a realization that you can grow up without ever having to really grow up, and I hope to God I never do, because, well, acting like an adult is really, really boring.

Instead, I’ll just keep on faking it while I sink my paycheck into stuff like vinyl records, console games and all the candy I care to eat (which is one of the only good parts about adulthood, in fact). If business or public responsibilities dictate decorum, well, I’m always ready to snap into character and play the role of someone who knows what they’re doing instead of simply faking it while figuring out what the hell I really want to be when I grow up – although at this point, depressingly, I suppose this is kind of it.

I haven’t really ever openly admitted that I still don’t know what I want to do, have no idea what I’m doing and am basically suffering from the same existential crisis as most people my age – or any age, really – rejecting the inevitability of age and the finality of our reality. You can be anything you want when you grow up, we were told, but for some stupid reason, this shit is what we chose, and we’ve just got to make the best of what’s more or less a bad situation.

The good news is, when it comes to acting like a punk kid in the world of work, I’m in pretty good company. A survey released today by CareerBuilder reveals that 3 in 4 workers report to observing some form of “adolescent behavior” in the workplace. 77%, in fact, say that at some point, they’ve seen their colleagues digress to the kind of childish behavior that we supposedly left on the elementary school playground – stuff like whining, pouting and throwing a temper tantrum.

Which, come to think of it, describes most of my bosses’ management style. 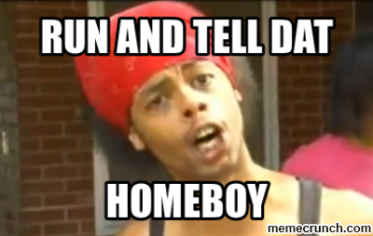 The point is that this behavior is not only endemic, but symbolic of the fact that there is a constant internal struggle most of us have between the person we are and the professional we’re supposed to be, and at some point, our inner child triumphs over our adult facades.

You probably don’t have to dig too deep to think of a time where you thought that a colleague needed to grow the hell up, or was acting completely immature and childish.

How dare anyone do something as sophomoric as whine while they’re at work? I mean, this is Corporate America, people, show some respect, even if that’s not reciprocated and most employees are essentially treated as children by the powers that be, constantly patronized by our leaders and policed by draconian policies and HR rules (like personal phone call prohibitions) that seem to reinforce that these childish behaviors, while not tolerated, are the expectation instead of the exception. But few employers trust their employees to act like adults, which, conceivably, is why childish behavior at the office is so statistically prevalent.

While the best of us can break down once in a while, according to CareerBuilder, “displaying childish behavior can also take a toll on one’s professional brand,” (or help it, but realize that I’m kind of an outlier on that front) with certain actions negatively impacting employees’ development and career advancement opportunities.

For example, 62% of employers reported they were less likely to promote employees who displayed negative behaviors like pouting or whining; 51% consider “vulgar language” an indication that an employee isn’t ready for a promotion (fuck that, right?) and 44% say that gossiping or socializing too much with coworkers can kill advancement opportunities. So, long story short, if you want to get ahead, you’d better start acting your age and grow the hell up, already. Even if that’s not nearly as much fun, frankly.

Because I still laugh at fart jokes, enjoy watching cartoons and start every morning with a bowl of Lucky Charms or Cap’n Crunch, I must admit that reading the CareerBuilder results, I was surprised by what’s considered a “child-like” behavior at work. I mean, sure they’re slightly sophomoric, but among the examples respondents cited as the most commonplace adolescent behaviors they’ve witnessed at work include “refusing to share resources with others,” “forming a clique” or “throw a tantrum.”

These all seem like B-School best practices; after all, the goal of business is to gain market share, not share resources. Forming a clique seems like an optimal outcome of corporate culture and a potential reflection of engaged, collaborative teammates.

And throwing a tantrum? That’s one of the most pervasive (and accepted) styles of situational leadership out there, the preferred tactic of lauded luminaries ranging from Jack Welch to Steve Jobs whose business acumen we otherwise celebrate.

The Darwin Awards Meet Your Workplace: Don’t Be This Douchebag.

Of course, senior leaders and executive managers have the prerogative of acting however the hell they want to get the results they need, and those ends largely justify the means.

But that doesn’t mean that every incident of workers behaving badly is even close to justifiable – in fact, sometimes, workers act so childish that they’re memorable enough to warrant a specific shout-out in the survey results.

While these real life anecdotes from the CareerBuilder survey serve as cautionary tales, they’re also pretty friggin’ hilarious, too:

You don’t have to be childish to think those are hilarious – and realize that no matter how sophomoric your coworkers might be, it probably could be worse. And behaving like a child isn’t all bad – because if we all transformed ourselves into consummately professionals and serious adults, we’d be stifling the main drivers of imagination and innovation. These two qualities are all too rare in business, but represent a significant competitive advantage if properly harnessed and channeled (as any Silicon Valley startup or agency can tell you).

The “adolescent behaviors” cited in the CareerBuilder study are often hard wired into our nature – we all whine once in a while, or sulk when things don’t go our way. That’s part of what makes us humans, and what makes work sometimes feel a little bit less like work, and our coworkers feel a little less like “colleagues” and “teammates” and more like, you know, real people who you can really relate to.

These are the fundamental building blocks of what’s become codified as company culture, and if we suppress these behaviors for the purposes of conformity, then we’re missing out on those twin goals of transparency and authenticity in favor of conformity. And that’s not only boring, but bad business, too.

At least that’s my excuse for being a brat.

← Street Cred: Simple Strategies to Stop Sucking At Sourcing.
How To Make Friends and Manipulate People. →

5 Comments on “Latency Period for Life: True Confessions of A Fake Adult.”