For those of you who didn’t sink tens of thousands of dollars into an ultimately worthless liberal arts degree or aren’t fans of the performing arts genres of the late Renaissance (for $500, Alec), you might not have heard of Commedia Dell’Arte: literally, “The Comedy of the Profession.”

Without getting too deep, it’s basically the Venetian equivalent of “In Living Color,” utilizing stock characters and sweeping stereotypes as the basis for what amounts to a satirical indictment of social mores and cultural values. Kind of like a Tyler Perry movie but without the evangelical undertones and cross-dressing.

For Commedia to work, it requires familiarity with the various character types in play and how they interact when thrust into conflict or collaboration, similar to employer branding, generational theory or corporate diversity and inclusion initiatives.

The aesthetics of Commedia are a lot like contemporary recruiting; the ubiquitous use of masks to dehumanize and deemphasize the individual; an overreliance on borrowing and creating generic content instead of producing work with a modicum of originality (think: “our people are our greatest asset”), and overreliance on presentational style over substance.

But in creating what more or less amounts to what marketers refer to these days as “buyer personas” to speak to their audience, Commedia anticipated what psychologists refer to as ‘confirmation bias’ and talent acquisition professionals refer to as ‘soft skills.’

The fact remains that all people can be conveniently placed into about a dozen different buckets, individual nuance and personalization be damned. If you’ve ever read an article on Gen Y in the workplace, or recruited candidates out of a specific school or company, you’re well familiar with this phenomenon already.

Half a millennium after Commedia’s commercial peak, the art form – and the characters types upon whom its comedy is premised – remains as applicable today as ever. And when it comes to sweeping performance art based on the collision of disparate characters, the HR Tech vendors you’ll see at industry trade shows are, more or less, keeping the Commedia Dell’Arte conventions alive and well. 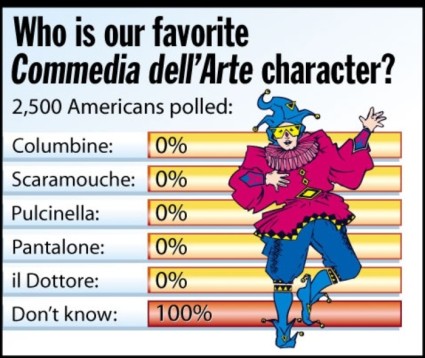 With the fall conference season in full swing, here’s your guide to the Commedia characters you’re likely to run into during a stroll through any expo hall – and watching the drama play out is infinitely more entertaining when you realize that it’s more theatre than anything else.

1. Pierrot (The Sad Clown): One of the few unmasked Commedia characters, Pierrot is a buffoon who is constantly scorned by the obvious unrequited love of the beautiful women he pines after but obviously, his base humor, lower class sensibilities and obvious ignorance of reality means that his affections are constantly unrequited.

The HR Convention Equivalent: Those vendors with the booth in the back no one has ever heard of, promoting prizes no one wants (win an iPod Nano!) and whose “revolutionary” product is so obsolete or specious that you know there’s a pretty good chance that they won’t be around next year, since they blew their entire budget on trying to compete with the cool kids with cash flow, brand awareness and actual case use for HR and recruiting.

2. Harlequin (The Scheming Servant): Harlequin, like the romance novel imprint his name inspired, presents himself as a faithful servant, but who, in fact, uses the confidence of his master to undercut his plans for personal gain. A trickster, Harlequin is more obsessed with style over substance, and will put personal gain ahead of professional duty. Particularly when it comes to winning the ladies.

The HR Tech Equivalent: If this doesn’t sound like one of your HR Tech vendors already, you’re obviously the master being duped. Most HR Tech product marketing and sales falls squarely into the Harlequin school of presentation. If you’ve ever asked if a vendor has a particular function or feature and heard, “It’s on our roadmap for next quarter” and who spend more money on swag and sponsored parties than they do actual product development, ignore that whole “customer first” act. That ends once the ink dries on the contract.

Examples: Any publicly traded “integrated talent management” provider still building off a code base developed sometime during the Clinton administration. There are too many of these to even name – nor do I want their lawyers after my ass, either.

3. Pantalone (Rich Uncle Penny Bags): The “money” in Commedia Del Arte, Pantelone is one of the most ubiquitous and reoccurring characters. With his great wealth and haughty, holier than thou attitude, he’s still driven by greed although he’s already at the top of the pecking order. And always ends up victimized by his own hubris

The HR Tech Equivalent: You probably won’t see them actually at any industry convention, because they’re just too good for deigning to be seen with the peasants in an industry which is also the source of their wealth – wealth largely earned by the exploitation of the mouth breathing masses.

There are many more Commedia characters in the ecosystem, but given the fact that this piece is directed towards HR Tech vendors but uses a dramaturg’s approach, I’m betting none of you even got this far.

But if you did, you already know that Il Dottore (the old doctor who deliberately gets in the way of young upstarts) is any generalized, traditional job board and Scaramouche (the self-indulgent huckster) is any “influencer” whose only claim to such is the fact they occasionally blog. Present company included.

5 Comments on “Shady Characters: The Performance Art of HR”