Under the Bridge and Trolling 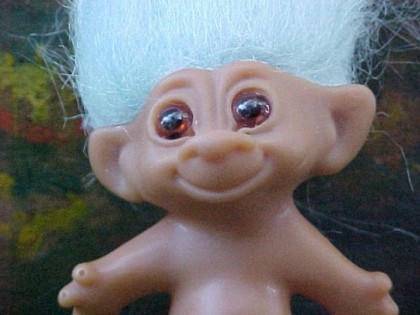 I’ll confess: I’m a troll.  And not because I’m so damn short.  It’s because, to cite my favored definition, a troll – in online parlance, at least – is someone who enjoys experimenting with the emotions and passions about things that seem, to any reasonable person, silly, superficial and specious.  Take sourcing, for example.

Now, your average person would not have an opinion on, say, the irrelevance of Boolean logic as applied to a search engine algorithm for the purposes of researching an individual’s digital footprint.  But here in this weird little outpost of the blogosphere, well, them’s fighting words.  Or corporate culture.  We write reams about how essential it is to retaining top talent, while the rest of the world just goes to their crappy jobs in crappy offices.

My contrarianism stems from nothing more than the idea that this recruiting industry has become unnecessarily complex (there are harder things to sell than jobs, all things being equal) and that it’s just one part of the sum of the system of interpersonal interaction meets technological innovation.  And stuff like cool hacks and killer apps is kind of cool to even the most garden variety of geeks – only we’ve got Twitter instead of Tolkein to nerd out on.

I’m often told, and I’m actually not entirely sure what this means, that I “keep it real.”  While I think that phrase was fresh about the same time as the Prince of Bel Air, I also participated in a panel called “Keeping It Real in HR” at an annual SHRM Young Professionals national conference a few years back, so I’ll pour one out for Uncle Phil and own it.  I hate taking a compliment, particularly since most of what I do is predicated on pissing people off, which makes me feel way more comfortable (and, frankly, fulfilled) than when people say nice stuff.  Which might be why I rarely do, myself.

I was contacted by a friend and fellow recruiting industry observer the other day, who was offended by an anonymous Twitter account which, by all accounts, existed primarily for the purposes of flooding the back channel of an event with vitriolic attacks that, back before social media, used to be called libel.  I won’t do the dignity of acknowledging that account, or the specific circumstances behind it, but it directly addressed perhaps the fundamental problem, and my biggest pet peeve, with this whole social thing, particularly in an industry as insular as online recruiting and HR.  It’s the antithesis of keeping it real; it’s more or less content cowardice.

Don’t hide behind some silly avatar or snarky handle that only pops up once in a while, like digital herpes, to wreck havoc and disappear until the next hashtag rolls around.  If you won’t put your name on it, then don’t put it out there on social.  Period.

Here are the basic rules of engagement for participating in the online HR and recruiting conversation:

1. Don’t sell your products or services without first adding value.

2. Disclose any or all agendas, and clearly identify whether or not you’re speaking as yourself or on behalf of a company.

3. Don’t make personal attacks – attacking products and sweeping archetypes like, “agency recruiters” or “HR generalists,” however, is OK.  But if you ever actually call someone out, make sure you can back it up.

4. Don’t make noise for the sake of being heard.

5. Own everything you do.

That’s not hard.  But when you choose to eschew a real byline for some silly persona (which, by the way, I can tell you can be done using an actual identify), then you’re not being a troll.  You’re being a douche bag.  And for an audience that mostly deals with candidates and hiring managers all day, there’s no need for more of that in this corner of the world of work.

I can think of a dozen people I know who do this crap off the top of my head, and the justification across the board is, “this way, I can say stuff I’d never be allowed to say if I revealed myself.”  That should be your first tip off right there – sure, you can spill the dirt about recruiting in a way that would be highly illegal if you didn’t hide behind an avatar, but if it’s a violation of what your professional ethics – which is implicit in anonymity – then you should probably stop right there.  Because when you go after people who have the cajones to actually use their real identity, you’re not only hurting feelings, you’re hurting livelihoods.  I know of another instance where a completely separate fake account on a hashtag being monitored by a potential employer ended up in a candidate not getting a job offer because of what was likely intended as a joke.

But if you think jobs are a joke, and hide in fear of being found out instead of found online and in person, I’d suggest you’re likely in the wrong line of work.  You should really consider going into a career in finance.

← Why Blogging Best Practices Are BS
Let’s Talk About Tech →

6 Comments on “Under the Bridge and Trolling”